The Field Arboretum is an open area and stand of woods on the west slope of Prospect Hill, just northwest of the village center. It is the site of the Second Meeting House built in Stockbridge.

On April 7, 1937 this property was given to the Association by David Dudley Field, Jr.

The land is subject to runoff from the hill above, and attempts to maintain significant trees have not been met with success.

Location. Northeast of the junction of Old Meetinghouse Road on the south and North Church Street on the west. Prospect Hill Road is a short distance uphill to the east.

Directions. Starting at the Red Lion Inn, head west on Main Street/Route 102. Continue on Route 102 when it turns right/north onto Church Street. When Church Street bends to the left, turn right onto North Church. Take the right fork a short distance uphill until it merges onto Old Meetinghouse Road. The arboretum meadow is across the street. 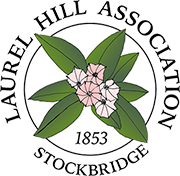